Yesterday the funeral procession for Thich Nhat Hanh happened.  His followers and fellow monks trailed a procession of pallbearers carrying Nhat Hanh’s coffin from Tu Hieu Pagoda, where he spent his last days, to the cremation site.   Others kneeled and clasped their hands in prayer on the roadside and bowed to the ground as the casket went past.
Our friend Tenzin Choegal has written and sung a wonderful farewell,  the link to which I have put below.. If the link does not happen for you, just google. ……. A prayerful Homage to Thich Nhat Hanh https://youtu.be/m59Dx5WL7ro 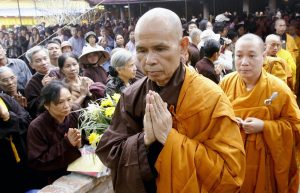 In 2014, Thich Nhat Hanh suffered a stroke. Since then he was unable to speak or continue his teaching. In October 2018 he let his devotees know, using gestures, that he wished to return to the temple in Vietnam where he had been ordained as a young monk. Devotees from many parts of the world had continued to visit him at the temple.

For Thich Nhat Hanh, mindfulness (the main strand and foundation of his teaching) was not a means to a more productive day but a way of understanding interdependence, the connection and codependence of everyone and everything.In a documentary, “Walk With Me,” he illustrated interbeing in the following way:

A young girl asks him how to deal with the grief of her recently deceased dog. He instructs her to look into the sky and watch a cloud disappear. The cloud has not died but has become the rain and the tea in the teacup. Just as the cloud is alive in a new form, so is the dog. Being aware and mindful of the tea offers a reflection on the nature of reality. He believed this understanding could lead to the possibility of more peace in the world.

I WILL SEE YOU ON THE MAT.