Every month I spend many hours in front of the computer, read at least a hundred pieces per day, read  4 or 5 books a week do three to eight hours writing per day, publish, link’d and sometimes tweet between 8am and 11pm.  I care about you, and I love doing what I do. I especially love these daily newsletters.

The though of the day (which is a constant thought) has been generated by a beautiful book from my collection.  SELF KNOWLEDGE by Sri Sankaracarya.  This book was published a few months after I was born, but Sankaracharya (or Sankara) was born during the eighth century after Christ. 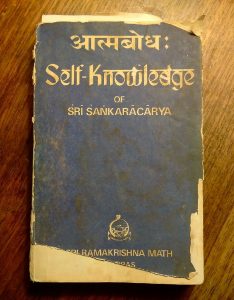 At the time that this books was published,  Ghandi was still alive, thousands were dying due to the partition of India, Churchill although not PM was still in the Parliament, and the Queen-to-be was playing “mothers and fathers” with her fiancé Phillip funded by the public purse.  This book saw it all and more.

As in most older Indian texts, the preface and the introduction are lengthy, and the “meat” of the texts written in both English and Sanskrit is more than an afternoon’s read.   It is a treatise on Advaita Vendanta, the philosophy of Non-dualistic Vedanta based on the 68 verses composed by Sankara the great philosopher of non-dualism, who devoted his life to the practice of spiritual austerities, meditation and yoga (which at that time certainly had nothing to do with a fitness regime).  He also wrote commentaries on the Bhagavad-Gita, the Brahma Sutras and the principal Upanishads.   Before he died at the age of thirty two in the Himalayas, Sankara had established monasteries in Mysore, Puri, Dvorak and Josi math.  He reorganised the ancient order of Sannyasis and assigned to it the leadership of Hindu Society.  Like Patanjali, he was a poet, a mystic, a philosopher, a religious reformer and a passionate lover of God.

His message you have heard many times before.  From the cradle to the grave the unilluminated soul engages in ceaseless action, striving to shun evil and realise the good, but, his actions and activities are influenced by love and hate, attachment and aversion, and he hopes to experience through action, eternal happiness in the outside world.  He roams aimlessly in samsara the world of change and becoming, rising and falling as a result of his action.

The book points towards the  contemplation of Atman, when man can be free from I-consciousness and the longing for results.  In his actions he recognises the influence of the gunas which constitute man’s physical nature, however his soul is always at peace.  Thus appearing to be active he is really action-less.  If his soul is identified with action to even the slightest degree then It has not realised its true nature.

Sankara recognised that few aspirants were/or are strong enough to climb the path.  Most require a symbol of truth or a relationship with a Personal God, and out of compassion for these seekers he composed many hymns in praise of the popular dieties.  These hymns are recited by countless devotees all over India at times of prayer and worship.  Through alll of the hymns, dualistic or monistic is the expressed longing of the devotee for freedom from ignorance, which alone is responsible for suffering in all its forms.

Sankara initiated the workshop of S’akti, or the Divine Mother, in all of his monasteries.  The conclusion of the non-dualistic philosophy are epitomised in four statements – *The Divinity of the soul *The unity of existence * the Oneness of The Godhead and *The harmony of religions.