Friday already!  Almost February…  What an exciting time.  A time to set our course for the year, a time to set goals, and imagine them..  if you can’t imagine them coming to fruition, then it is unlikely you will be able to achieve them.

If you are interested in ME helping YOU,  I can.  My ZOOM TAROT READINGS (or consults in the studio now allowed) will show you the way forward.    I am totally interested and available to help those people who are ready to take action.  I am not the kind of TAROT Reader who predicts the future, requiring nothing from you.  As I have said before – if you seek comfort you will not find the truth, but if you are seeking the truth you may find comfort.

TO BOOK A TIME WITH ME: Choose a number of times you are available (to give us both a choice of day and time) and email me to make an appointment.  To pay go to the home page, choose PAY VIA PAY PAL – which also accepts credit and debit classes – and pay for the class.

ZOOM AND STUDIO MEETINGS COMING UP:

FRIDAY 6.30pm FREE Tarot/Pendulum Class
SATURDAY 2pm IN STUDIO Tarot/Art Class.  This is a monthly in-studio class which follows a series of Zoom classes and allows those students who can, the opportunity of doing a studio class with the teacher to get better understandings of the processes involved.
SUNDAY 10am, The Gita Study Class.  We are coming to the end of this series.  On its conclusion, we will be taking a break by studying “THE ABUNDANT BREATH” 10am  Sunday morning time slot  Starting the 6th February. You should make a time for this class – it will make sense of your life as it has made sense of mine (if you let it!).   Will be doing the Gita again sometime later in the year. 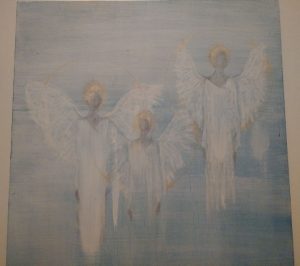 At last! In exploring the breath totally, I have outdone everything I have done in my life. In the ABUNDANT BREATH I have found love (that God loves me, I love God and experience that love), I have found in my exploration, bliss,  and have learned I can live from it and in it.

The Divine experience of The ABUNDANT BREATH.

After all these years, working with the breath has allowed me to put aside the negative experience of birth and childhood and all the negative generalisations I made consciously or subconsciously way back then (and they really did inhibit my abundance). I now have days of feeling overwhelming love for everyone. I just want to say, that I am totally grateful that I have been led to yoga, to the Breath, to YOU my community of yogis, to this place in time and space, and everything I have experienced in my life.

I hope this makes as much sense to you as it does to me, because before nothing did. I now understand that “Nothing can befall us except it is ordained by Allah – trust Him”.  The synchronicities alone are amazing….and are more than enough to work with this.

It seems too simple doesn’t it?   STOP THINKING AND START LIVING.

“Without an escort you are bewildered on a familiar road;
don’t travel alone on a road you haven’t seen at all;
Don’t turn your head away from the Guide”. (Rumi)

We all ask ourselves – whoever brought me here.  You are not the first to ask.

All day I think about it, then at night I say it.
Where did I come from, and what am I supposed to be doing?
I have no idea.
My soul is from elsewhere, I’m sure of that,
and I intend to end up there.

This drunkenness began in some other tavern.
When I get back around to that place,
I’ll be completely sober. Meanwhile,
I’m like a bird from another continent, sitting in this aviary.
The day is coming when I fly off,
but who is it now in my ear who hears my voice?
Who says words with my mouth?

Who looks out with my eyes? What is the soul?
I cannot stop asking.
If I could taste one sip of an answer,
I could break out of this prison for drunks.
I didn’t come here of my own accord, and I can’t leave that way.
Whoever brought me here, will have to take me home.

This poetry. I never know what I’m going to say.
I don’t plan it.
When I’m outside the saying of it,
I get very quiet and rarely speak at all.      By Rumi

We all ask ourselves the question which has no answer “why am I here”….Rumi was no different – more eloquent of course, but no different.  He was closer to God and therefore closer to the answer, and we can be there.

All we have to do is to sit, and He will come.  We can strive, we can give, we can DO and DO and DO and be no closer to the truth.  When we stop and take time to hear the still small voice, we then have a chance to answer the question.  Covid is continuing to give you this opportunity.  Whether you take it, is entirely up to you.  You can long for the future when you are free, but I say you are free now, in this very minute, but you don’t know you are, and haven’t been grateful for this wonderful opportunity that has presented itself to you.  We don’t know when it will come again, so live every minute of it with gratitude.  It is wonderful.

I hope to share A couple of hours of Sunday with you – Teacher Training (and The Tarot Course on Saturday).  Bring your mind as well as your body.

As my heart is seeking it finds you in every soul I meet. – Ibn’ Arabi

This morning we can consider LOVE, and the story of Rumi the Persian Poet, and his lover Shams.  It is a wonderful example of love, courage, service and duty.  Love and death.  When I listen to the words of Rumi, and the music,  my heart also calls for the desert,  but I have been put here to write to you, to be with you. I am not who you think I am.  Do you know about you?

Rumi started his adult life as an authoritarian teacher, head of a community, strong husband, feared and honoured by most. A Judge. But inside he knew this was not life.  Like the Christian Saint Peter, he was at heart a homosexual..  He had no passion, no love.   Trying to be the person his family and community wanted him to be,  he was strangling the person he was at his heart.  These things have a way of surfacing, and so they did when he met Shams, and we are told,  fell instantly in love..  (and that is another story – there are many).

This meeting with the Dervish, transformed Rumi from an accomplished teacher and jurist, to an ascetic.  He left behind everything solid, everything stable to be with his Lover.  We don’t know much about his wife and children, but at the end end he was buried with great honour in the family tomb. Reconciliation and acceptance  occurred, and his poetry changed a community,  a country, and then reached the world.  Such is life – only the angels would understand.

Shams Tabrizi,  Rumi’s love, an itinerant poet, mystic,  had travelled throughout the Middle East searching and praying for someone who could “endure my company”. A voice said to him, “What will you give in return?” Shams replied, “My head!” The voice then said, “The one you seek is Jalal ud-Din (known as Rumi) of Konya” and the music was born.

However, on the night of 5 December 1248, as Rumi and Shams were talking, Shams was called to the back door. He went out, never to be seen again. It is rumoured that Shams was murdered with the connivance of Rumi’s son, ‘Ala’ ud-Din; if so, Shams indeed gave his head for the privilege of mystical friendship.

Rumi’s love for, and his bereavement at the death of Shams found their expression in an outpouring of lyric poems, He himself went out searching for Shams and journeyed again to Damascus. There, he realised:

Why should I seek? I am the same as
He. His essence speaks through me.
I have been looking for myself!

Rumi found another companion in Salaḥ ud-Din-e Zarkub, a goldsmith. After Salah ud-Din’s death, Rumi’s scribe and favourite student, Hussam-e Chalabi, assumed the role of Rumi’s companion. One day, the two of them were wandering through the Meram vineyards outside Konya when Hussam described to Rumi an idea he had had: “If you were to write a book like the Ilāhīnāma of Sanai or the Mantiq ut-Tayr of ‘Attar, it would become the companion of many troubadours. They would fill their hearts from your work and compose music to accompany it.” Rumi smiled and took out a piece of paper on which were written the opening eighteen lines of his Masnavi, beginning with:

Listen to the reed and the tale it tells,
How it sings of separation..

Hussam implored Rumi to write more. Rumi spent the next twelve years of his life in Anatolia dictating the six volumes of this masterwork, the Masnavi, to Hussam.

In December 1273, Rumi fell ill; he predicted his own death and composed the well-known ghazal, which begins with the verse:

How doest thou know what sort of king I have within me as companion?
Do not cast thy glance upon my golden face, for I have iron legs.

Rumi died on 17 December 1273 in Konya.  His death was mourned by the diverse community of Konya, with local Christians and Jews joining the crowd that converged to bid farewell as his body was carried through the city.  Rumi’s body was interred beside that of his father, and a splendid shrine, the Yeşil Türbe (Green Tomb, قبه الخضراء; today the Mevlana Museum, was erected over his place of burial. His epitaph reads:

When we are dead, seek not our tomb in the earth, but find it in the hearts of men.

HAVE A WONDERFUL DAY.  The sun is shining, and there is a gentle breeze where there has been an icy wind..  beautiful.

Open your eyes, for this world is only a dream – Rumi