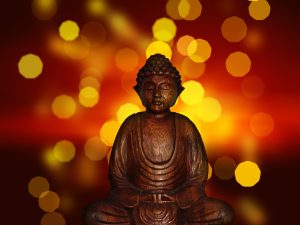 Today I was sitting looking at all my books, hundreds of them.  I was looking for  an author who had (reliably) written about HAPPINESS.  There was only one who spoke of it in a human, achievable way –  THE DALAI LAMA.

I thought that all of us need reassurance of a bigger picture, of an art called “Happiness”.  The Dalai Lama  goes even further the that, he calls it THE RIGHT to happiness, and he has written about it a lot.  So, rather than re-iterate what he has said for almost his entire life, I thought I would tell a story told about Him.

In 1993 The Dalai Lama was giving a series of lectures at The University of Arizona.  Here everyone, not just the conference participants,  witnessed his willingness to reach out and create a feeling of goodwill and affinity with others, even in the briefest of encounters.

One morning after his public lecture, the Dalai Lama was walking on an outside patio on the way back to his hotel room surrounded by his usual retinue.  Noticing one of the hotel housekeeping staff standing by the elevators, he paused to ask her “where are you from?”   For a moment she appeared taken aback by the foreign looking man in the maroon robes and seemed puzzled by the deference of the entourage.  Then she smiled and said shyly “Mexico”.  He paused briefly to chat with her a few moments and then moved on, leaving her with a look of excitement on her face.

The next morning at the same time, she appeared at the same spot with another of the housekeeping staff, and the two of them greeted him warmly as he got into the elevator.  The interaction was brief, but the two of them seemed flushed with happiness as they returned to work.  Every day after that they were joined by a few more of the housekeeping staff at the designated time and place, until by the end of the week there were dozens of maids in their crisp grey and white uniform forming a receiving line that stretched along the entire path that led to the elevators.

What is the purpose of our life – your life? What makes your life meaningful? As The Dalai Lama has shown us, do you take time to not just notice others, but do you love enough to interact with them, make a connection?  The person who has been co-opted to disinfect the baskets at Coles, the person who collects the carts, who picks up the trash? Or abiding by the restrictions that apply regarding gathering and sanitising in this time of covid wether you believe  in them or no – just for the protection of others?  Why? Because you genuinely love and care for others at least as much as you care for yourself.   Love your neighbours as yourself.

What if we begin with the idea that the purpose of our existence is to seek happiness? A vision of happiness as a real objective, and one that we can take real steps towards achieving.  As you begin to identify the factors that lead to a happier life, you will learn how the search for happiness offers benefits not just YOU, but  changes everyone your life touches, even a maid standing outside an elevator.  It is easy – do more of the things that lead to happiness, and less of the things that lead to sadness or unhappiness….

If you possess an inner quality, a calmness of mind, a degree of stability within, then even if you lack various external facilities you would normally consider necessary for happiness, it is still possible to live a happy and joyful life.  How can we achieve this inner contentment?  There are two ways.

“Inch-worm, inch-worm, measuring the marigolds, don’t forget to stop and see how beautiful they are”.     – The Frog, Sesame Street.

Don’t just think about it – reach out.  Start with small things.