Before we start I have some Secondhand Paul Grilley DVD’s for sale, donated by a client with the money to go to the Foundation.  Anatomy, Chakra Theory and Yin Yoga.  $100 for the three or $45 each.  Normal Australian price $65 and more, each.  Email if you are interested: yogafirst@netcon.net.au

Let us talk about MUDRA, rather than the engaging dream I had last nite – more of that later…. I began by thinking that Mudra was another weird Indian “thing” and a Western way to make more money.  I was wrong about the first and probably right about the latter – unfortunately.

Put simply, Mudra is a gesture or touch which has an effect upon our state of mind…Since body and mind are a unity, the attitude of the mind and the body reflect each other.  This can work in cause and effect in either direction. To put it simply, a Mudra is a hand gesture that guides the energy flow to specific areas of the brain. There are many types of Mudras designed to bring different benefits, depending on what we specifically need. They are done in conjunction with breathing to increase the flow of Prana in the body. By practicing a particular mudra, a connection is developed with the patterns in the brain that influences the unconscious reflexes in the different areas. The internal energy is, in turn, balanced and redirected, creating an impact on the sensory organs, tendons, glands and veins veins.

Think about this.  When you are feeling tired, your body slumps, and when you are feeling on top of things you straighten up.  Our language reflects these attitude “putting your back into…”, “keeping your feet on the ground”, “putting your heart into…”.   When we talk about emotions we most usually speak in a language reflecting the body.  Being “close” to someone even if we are physically not. 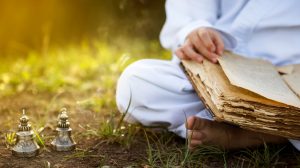 When we meditate in the Buddhist way,  we endeavour to keep our back straight.  This attitude is not just symbolic.  The body needs to be stable, balanced and close to the earth so our mind can harmonise with the body.  Take the image of the Buddha sitting in meditation with the fingers of one hand touching the earth, grounding his energy.  A mudra. 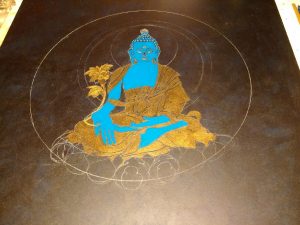 The mudras found in Buddhist iconography are related to the meridians of acupuncture and to flows of vital energy.  It is beyond the scope of these newsletters to delve deeply into  the theory and practice of amma (acupuncture) points and meridians in detail.  It is most generally acknowledged  that touch plays a very important part in the in the restoration of body and mind with which yoga is primary concerned.  We have always acknowledged the mind and the body are a single conditioned state – and the conditioned state of mind is always the consequence to  some degree of  a separation having opened up between the mental and physical states of our being.  One way of  understanding this seeming disharmony is to realise the extent to which we are “out of touch”.  Mudras bridge this energy gap.

That is one thing we are missing in covid.  Touch.  We touch another person as Buddha touched the earth,  The Earth Grounding Mudra.  Doing a mudra we feel a flow of energy which warms us.  This touching reduces stress and develops mindfulness.

In therapy, we have found that a light touch can do more in conveying love and caring than a more forceful gesture.   Gentle touch conveys love.  The wellbeing we feel is in proportion to the love we give out.

Try using the mudras as you sit quietly, notice the changes, journal the changes… like everything it takes time.  Don’t dismiss them as “for other yogis” until you have spend some time exploring their subtle energy.