Let’s start with JUBILEE and then we will get to Jerusalem.  The word “Jubilee” in the bible is a celebration that occurred every 50 years. (Lev.25).  The trumpet sounded calling to “liberty throughout the land and to all its inhabitants”.  The land was sparsely inhabited compared to today, however, all slaves were to be set free. All debts were to be cancelled, and all land returned to its original owner.

Apart from the impositions that Covid has imposed, which are not unlike Jubilee, I can’t imagine that happening today voluntarily,  primarily because we don’t trust the universe (God) to provide, and we certainly don’t trust our neighbours enough to limit themselves in that spirit.  If faithfully executed (and humans being humans I guess sometimes it was not) it would totally eliminate the problem of the rich becoming richer and the poor becoming poorer,  because once in fifty years, every fifty years everyone was on the same footing.  Parents who had sold themselves into slavery knew that their children would not be crushed by this economic legacy. They could have a fresh start, and conversely the wealthy also would know their advantage was not perpetual.

It also meant that land was only useful in so far as the crops it could provide.  Land in this way was not an investment.  The children of Israel did not own the land,  they only had use of it for 50 years.  God said “The land shall not be sold in perpetuity, for the land is mine” (Lev.25:23) .  It is very much the Aboriginal view of land – they believe they are just custodians.  The land looked after, cared for, and divided equitably so that all could benefit.

We have no written evidence of the Jubilee or its execution, what it does show us is the people’s concern for justice and equity.  We can see in this law the special consideration for the helpless and the needy which is always an important ingredient in simplicity.

It is interesting to consider which of the Yamas is/are highlighted by this practice?

Now for “Jerusalem”.  You might be thinking the place, but no, I mean the plant. The Jerusalem Artichoke.  I planted one bulb years ago, and I now have them all over the garden.  I became disenchanted after gorging myself on the occasion of my first harvest. I became jet propelled if you know what i mean! I lost faith in them but they didn’t lose faith in me, and every year the patch got bigger and bigger, and I gave more away.  I have been more circumspect this year because I have learned how to cook them and take the “fart” out of “farti-chokes”.   That whole tray came from the four stalks in the photo.  They are growing on an old futon which I put in the garden (that’s where they always go after they are replaced).  It traps the moisture, provides a good home for insects and you can see, artichokes love it. 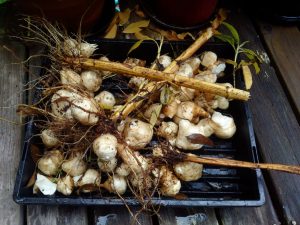 If you have artichokes I have found that roasted they are splendid, made into pesto (after roasting) they are delicious (and can be frozen for later)  and pickled they are crunchy gorgeousness.  But never, never,  ever sit down and eat a bowl of pureed artichokes… they can be disastrous.  You can make them into a dessert cooked in milk with fruit, but once again, not a big bowl full.

Enjoy your gardening.  This is perfect weather.