I am not addicted to the TV programme HOUSE, but I really like watching it.  Have you?  Over, and over and over again Karma is explored (although they never call it Karma).  They have patients “in extremis” who get  themselves checked in, mostly by almost dying in the first 5 minutes of the show.  People for whom there is no logical explanation of the problem, and House,  the hospital’s famous maverick diagnostician has to find out what caused the symptoms.  He rarely just treats the symptoms unless doing so is pulling back the curtain on the past.

His little team of helpers from time to time have to go to the patient’s house and scour it for something.  They don’t know what they are looking for and have to sift through the detritus of the past to discover the problems occurring in the now.  It happens in life.  The thing that appears to be causing the problem now, was caused by some “hiccup”, intentional or unintentional,  in the distant past.  Unfortunately, we need help to uncover it, which sometimes is painful.  We know uncovering the problem, easing the top off the scab to clean it up, isn’t going to be pleasant.  We don’t particularly want to go there.  The usual response on the show and in life is “Just give me a pill”.

This morning a husband and wife were close to death with an unidentified disease.. on sifting back the medical team discovered that the father 17 years ago apparently had sex (and a child) outside marriage…. he passed on a defective gene to both, who turned out to be the husband and wife in this time frame.  The clue? both had green eyes.  Unusual.  This whole situation had many ins and outs, blind alleys, mis-diagnoses, and went on for an hour, exploring  situations that occurred years ago which manifested in present time.

Today there was another “Karmic Backstory”.  House was totally rude to a patient, and refuses to apologise (in fact is grossly dismissive of his problem) although the guy really extended the olive branch, and goes above and beyond to level the playing field.  House, (who I think is on the spectrum), oblivious of what is happening compounds the problem over and over again with his insensitivity. Later in the episode, House  speeding home on his motorcycle – is followed by a police car – both pull over and guess who gets out of the police car?  The patient who in a cruel twist of fate turns out a senior police office, and arrests House using all of his disabilities against him!  We know that the Police Department isn’t going to care that House is a cripple, is a senior doctor, has clout…. Immediate Karma.  I know it is simplistic, but I enjoy it. It explores many ethical issues playing out in front of us daily.  IVF, The Gay Community, Incest and so on, and what they can cause medically.  How these negatives can manifest physically.

The program is even more interesting when you look for the Karmic content!! 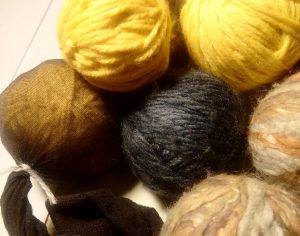 TO CHANGE THE SUBJECT:   Yesterday was my day off and one of my stops was at Lincraft (for wool).  I made laundry balls.  I have some and they are fabulous.  In the picture to the right there are some old ones, and some “under construction”.  .  It is said that they save 20% of the usual tumble drying time, eliminate static etc.  But, commercially they cost $50 for three plus postage via the TV ad.  I make my own, and I make them for others.  They don’t have a cute face painted on the front that the advertised “Wet Balls” have, and they don’t have a foam centre.  They are scrap wool all the way through.  Go to www.wildnweedy.blogspot.com to discover how you can make them.  Easily. and save heaps.

Have a lovely day, and this evening in front of the television (if you can’t darn),  make some laundry balls.