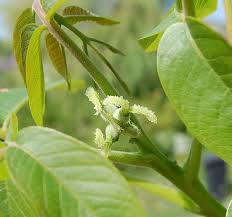 A holiday today, and the weather is fabulous – no holiday for me… I have had enough of lock-downs and days-away so now we are going back to “normal” you can have my holiday, I don’t want it.  It is a great time in the garden, and i can barely keep up with the harvest.

I have been making things with walnuts and sliced, dried Rieshi for the last month.  I have made NOCELLO which is walnut cured Vodka, Chinese medicinal wine using dried sliced reishi, VIN DE NOIX  – walnut cured wine and now walnut INK.  I have a recipe from the diaries of Isaac Newton, and the ink is almost black.  Walnut stains because of the iodine, content, and it is not a big step to imagine (and make ink).  I am going to make a powder, so I can use the ink when I need it.

I have been searching for a herb we can use to combat radiation poisoning – walnut is one.  During the Chernobyl nuclear disaster, the areas in the fallout zone ran out of potassium iodide and seaweed sources of iodine. They used black walnut tincture as an iodine supplement by painting people’s knee skin with it. It was effective in preventing radiation poisoning of the thyroid in those treated with it. (That’s iodine on the glove – it stains, that’s why it makes good ink). Walnut hulls are also a good source of vitamin C, which helps your body release toxins. 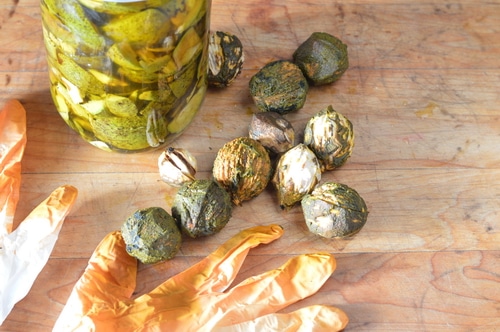 Black walnut hulls are antifungal and anti-parasitic, especially for intestinal parasites. They are also an antimicrobial, blood cleansing, detoxifying tonic. They also have some sedative properties.

However, they are not an herbal supplement that should be taken daily, although a teaspoon of the Walnut Wine seems to be safe.  The Chinese use medicinal wine in this way..   Black walnut hulls can be used externally to help with warts and herpes.  To use it as an iodine supplement paint the tincture on the skin of the knees, rather than taking it internally. It has been banned “over-the-counter” for years in Australia because of possible overdosing.

I have planted some walnut husks in the garden – to determine which, I put a number in a bowl of water and I planted three of the husks that sank.  I put them in a pot with compost and straw.  They need the chill of winter, so, I am planting out at the right time.  I doubt that I will ever see a walnut from my own tree, but, we can hope. 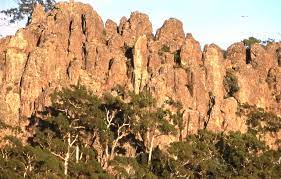 As you are aware, I live in Woodend, and part of our landscape, geological and cultural is HANGING ROCK.  In the middle of the 19th century, the traditional occupants of the place – Dja Dja Warrung, Woi Wurrung, and Taungurung tribes  were forced from it.  They had been its occupants for thousands of years and, colonisation notwithstanding, have continued to maintain cultural and spiritual connections with the place.

To the settler colonialist society, Hanging Rock became a place for recreation and tourism. It came alternately under private, government, and mixed public-private control.  It used to be the setting of the News Years Day races, and in the late 20th century, the area became very widely known as the setting of Joan Lindsay‘s novel Picnic at Hanging Rock.  More recently under the leadership of the Late Michael Gudinski it has been the background to the work many famous performers – the Late Leonard Cohen, Rick Springfield, The Rolling Stones and The Eagles – to name a few notable performers.

We can’t undo the past, but we can learn from it, acknowledge it,  reconcile and hopefully move on.  I just wish that the group that is “looking after the Rock” would stop.  Hanging Rock needs to be left alone.  We don’t need a footpath up and over it, we don’t need hand rails, tree guards, signposts and arrows…  The fee to enter should be used for an educational centre, not a new way of stopping people exploring the space. “Picnic at Hanging Rock” was a fiction, there are no spacemen, or black holes – we don’t need personal guides.  It is a special geological feature, with traditional owners – and they should determine its use.

SCHEDULE
ZOOM: Monday Gita 6.30, Tuesday 7.30 Herbalist Workshop, Friday 6.45 FREE TAROT.
Plus you could make a time for a zoom appointment with me.. last week I did Past Life Readings via zoom.  Not as deep as a personal in the studio reading, these zoom readings can help you get “unstuck”.  You could also join me on a forage walk, and the kitchen afterwards.

STUDIO YOGA: Monday 1pm, Wednesday and Friday 5.30. Personal, one-on-one sessions available by appointment if you are just getting back into a yoga regime after our covid disruptions.

SEE YOU ON THE MAT.